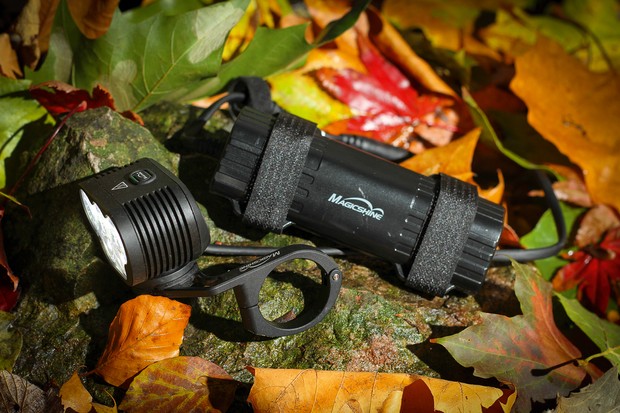 The power, spread and colour of the light emitted from the five LEDs is magical, making it one of the best-performing lights I’ve used in recent times. The side-to-side spread and cut-off is exceptional too.

Putting out a whopping claimed 6,500 lumens from a five LED head unit, the Magicshine Monteer should be an impressive performer.

It has three inline flood LEDs, two spot LEDs and there’s a single large power and mode change button on the top of the light that indicates battery percentage with changes in colour: green means 100 to 70 per cent of battery, blue between 70 and 30 per cent, red less than 30 per cent, and it flashes red when the battery’s life reaches 10 per cent or lower. At 150 lumens there’s a claimed maximum run time of 82 hours. 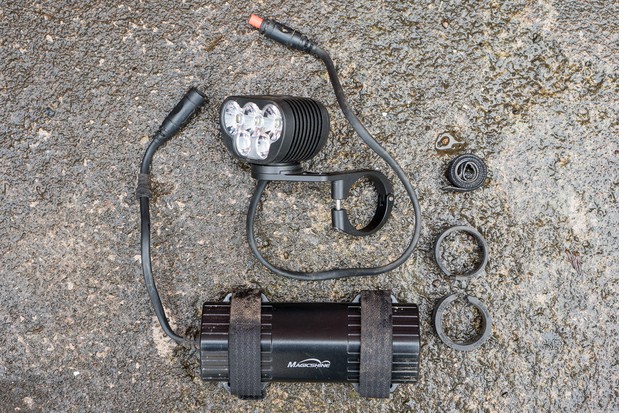 The Monteer comes with enough accessories to get you going. Alex Evans

A long push turns the light off, while a double push when the light is on activates the second and third set of modes.

The head and battery units are connected using a long cable, measuring 63cm in total, with the longer part attached to the head unit. The cable attaches using a unidirectional push fit with arrows to indicate correct alignment. 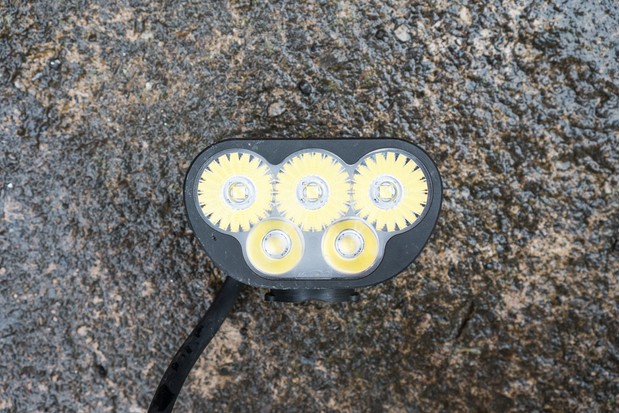 It has an IP65 dust and waterproof rating and comes supplied with a handlebar mount that uses a Garmin-style twist-lock fitment. The mount is compatible with both 31.8mm and 35mm bars with the supplied shims. It’s off centre so it’s possible to mount the light directly over the stem, centrally on the bars.

The separate battery pack has a total of 151Wh spread across six cells. There are two Velcro straps that should attach the thin and relatively long battery to most locations on a bike and the pack has a concave internal shape to help it sit securely on frames.

It also features a thermal protection mode where the light’s output is reduced if it gets too hot. 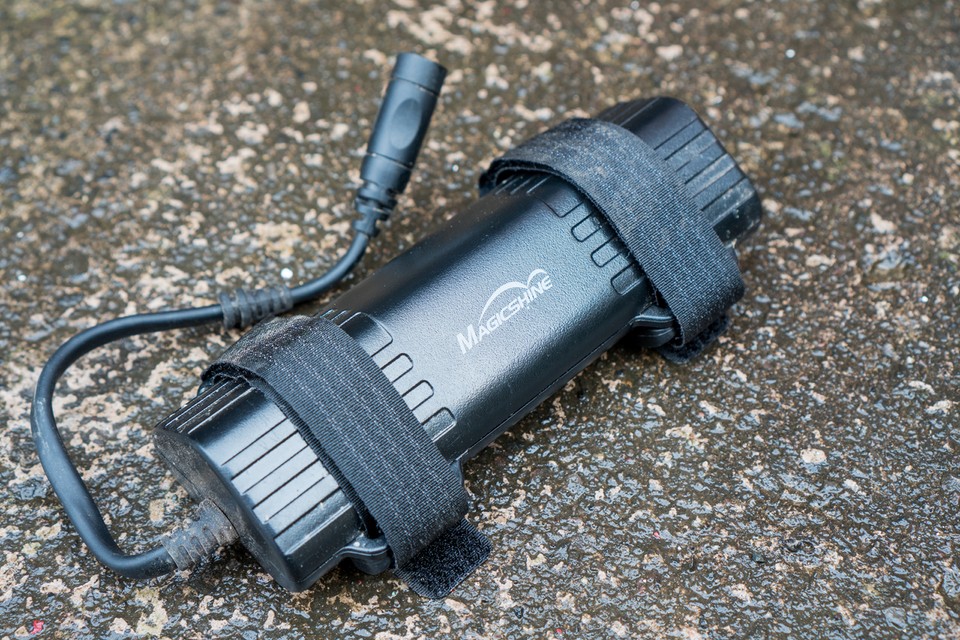 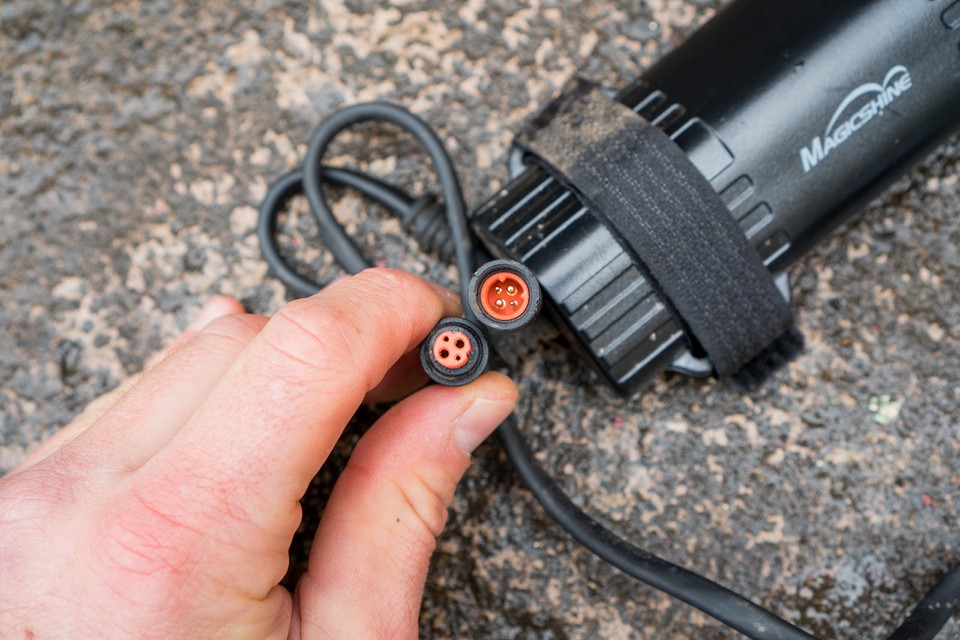 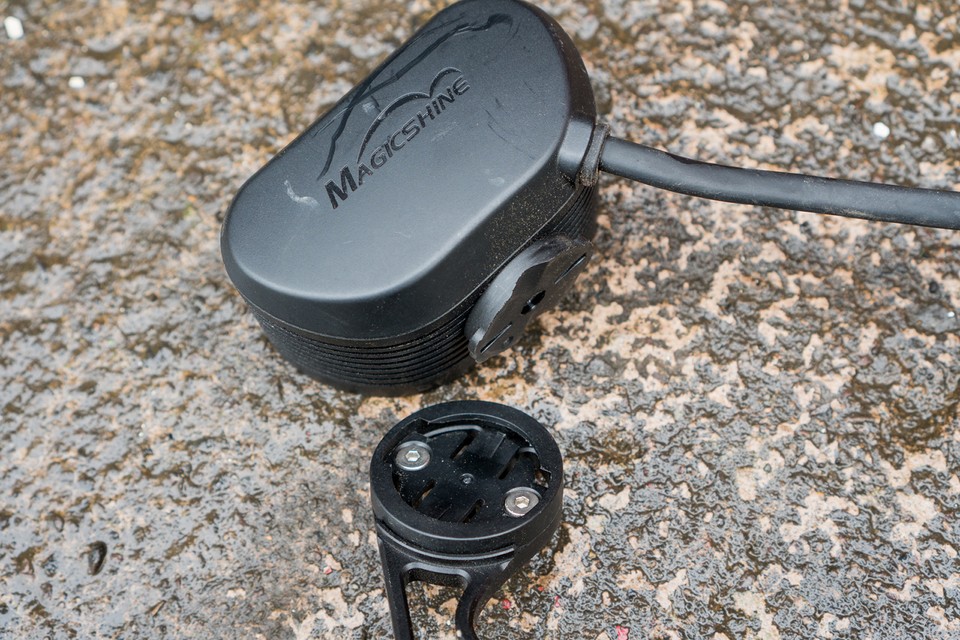 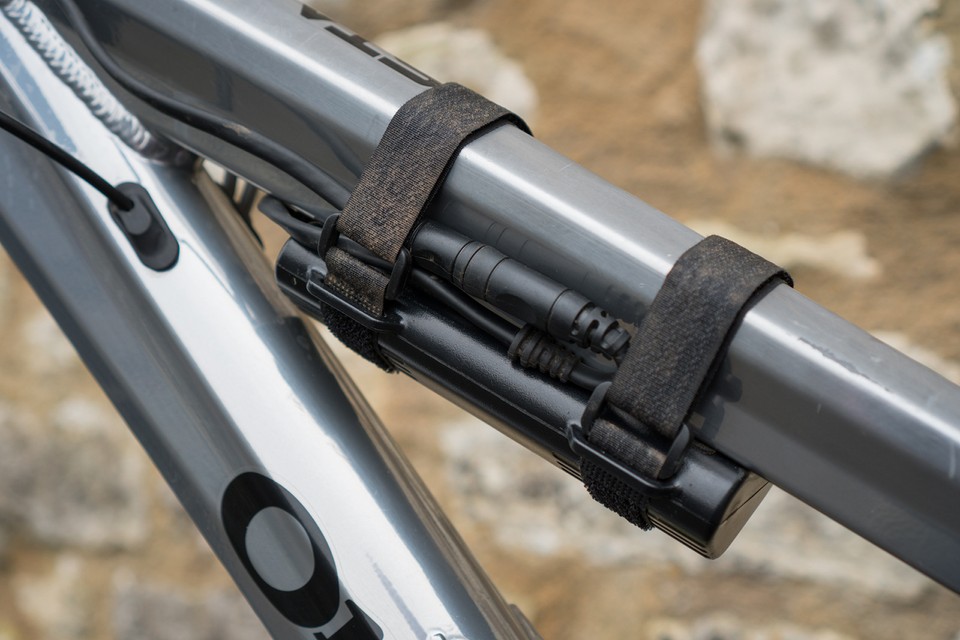 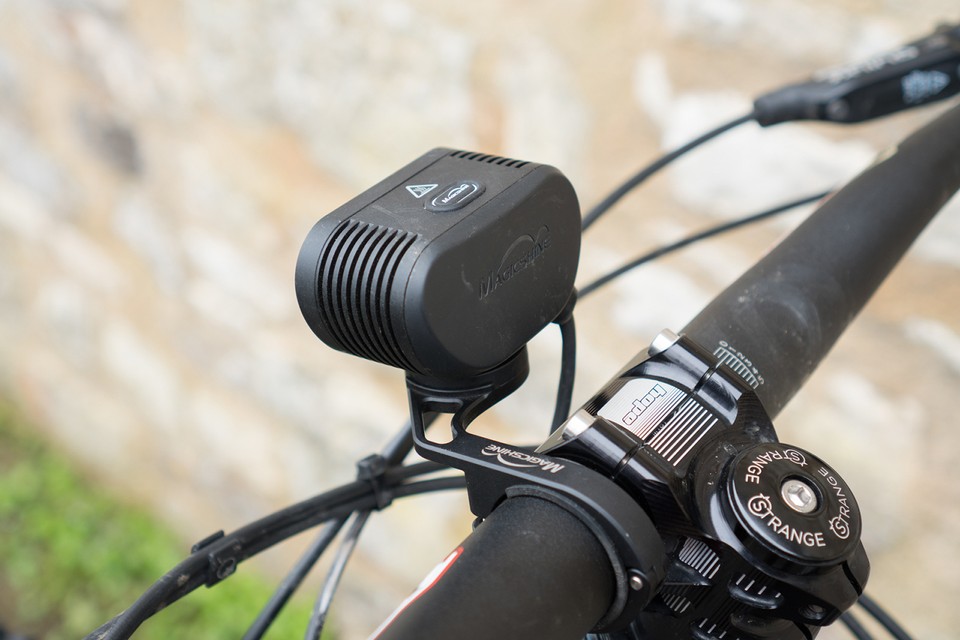 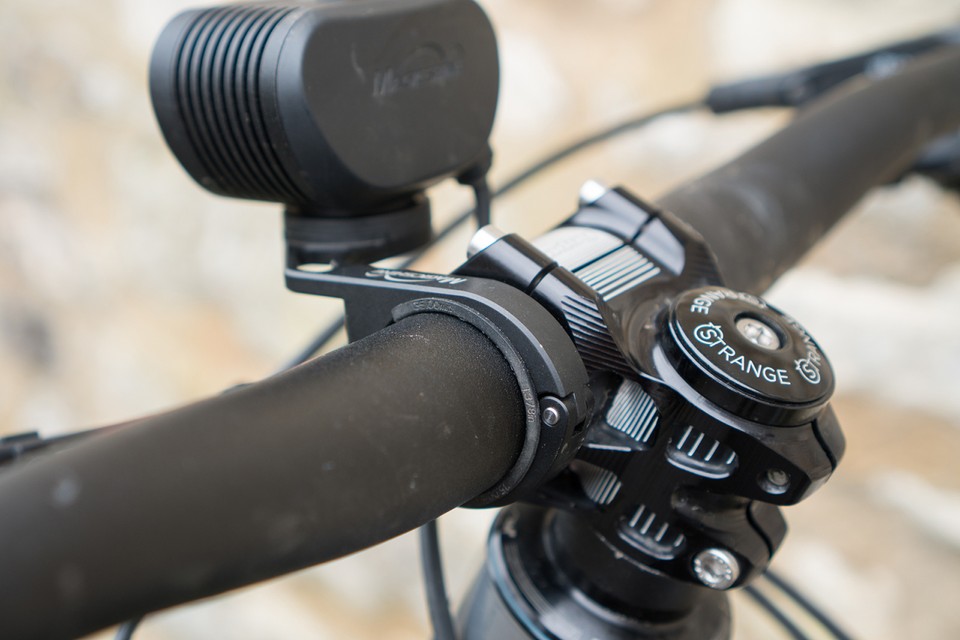 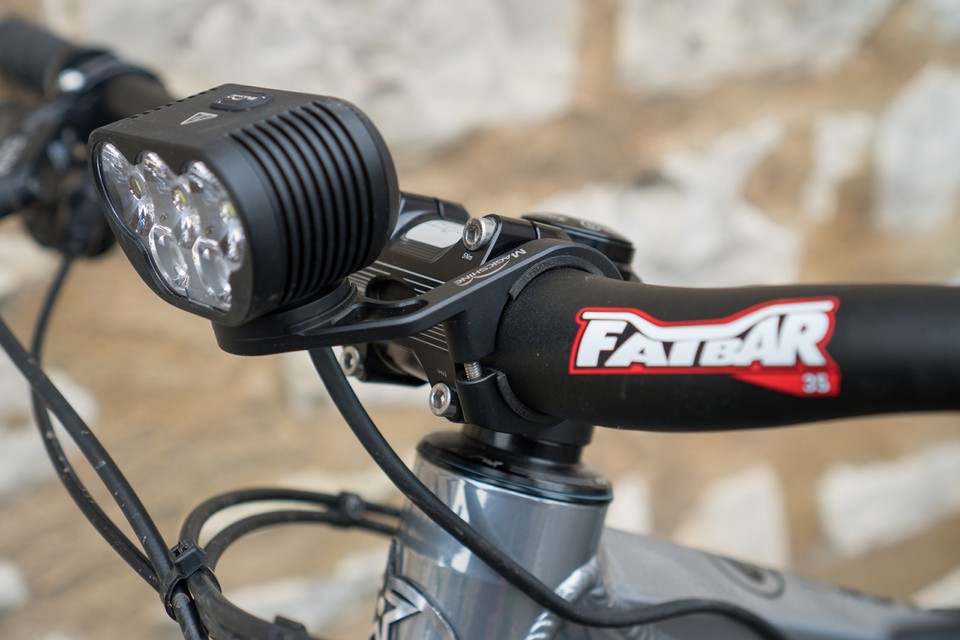 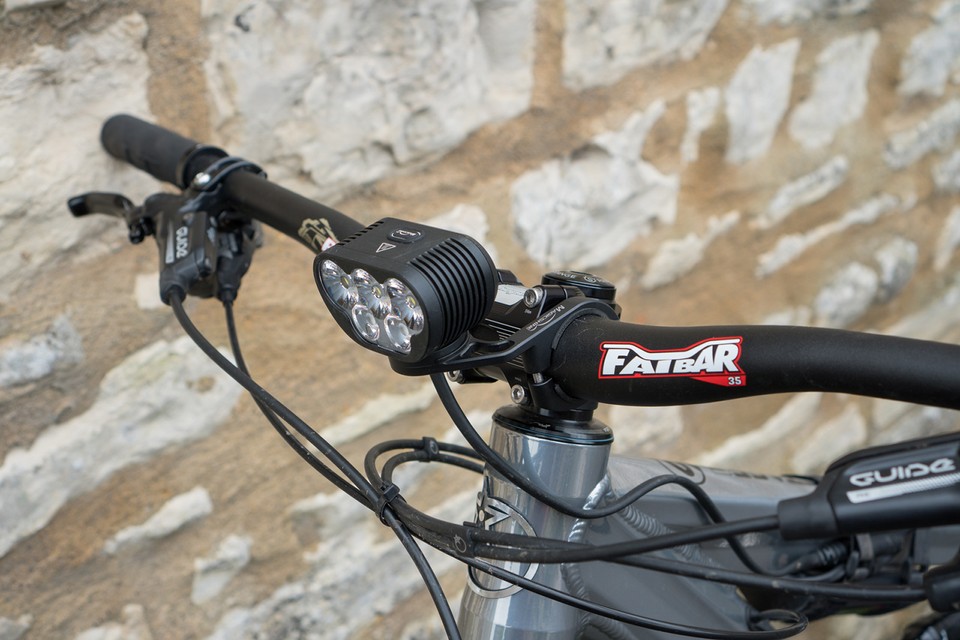 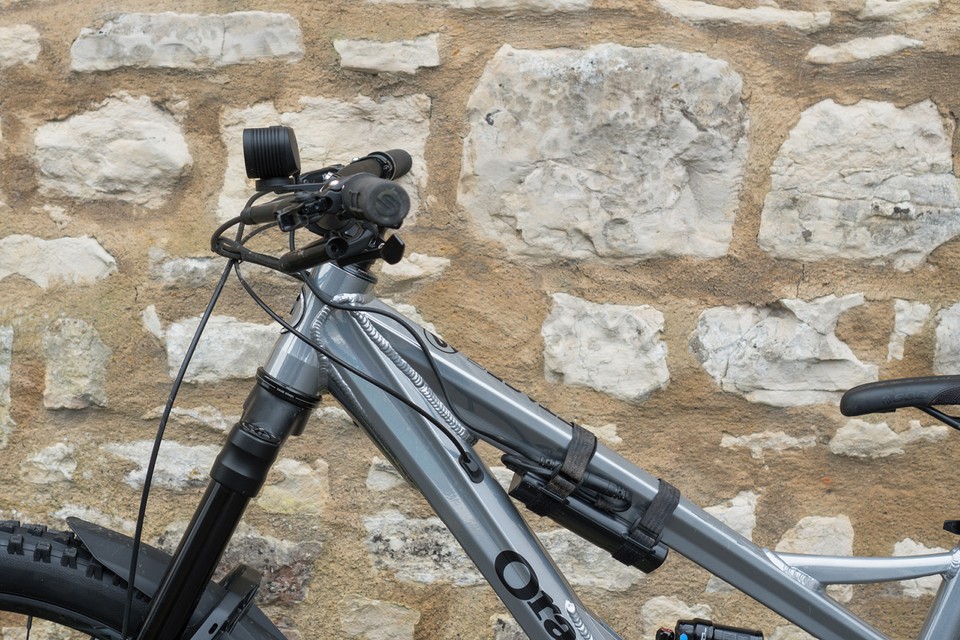 In the maximum 5,000 and 4,000 lumen modes the light is astonishingly powerful and the usefulness of this power is impressive to boot. The light’s spot LEDs illuminate the trail close to the bike while the floods do a great job of creating side-to-side and forward visibility with unrivalled clarity.

The beam’s projection, colour and overall power mean that this is a light that’s best suited to some of the gnarliest, fastest, twistiest trails out there. The spot lights have a distinctly yellow hue that, combined with the white/blue flood, create a perfect mix of definition and visibility. 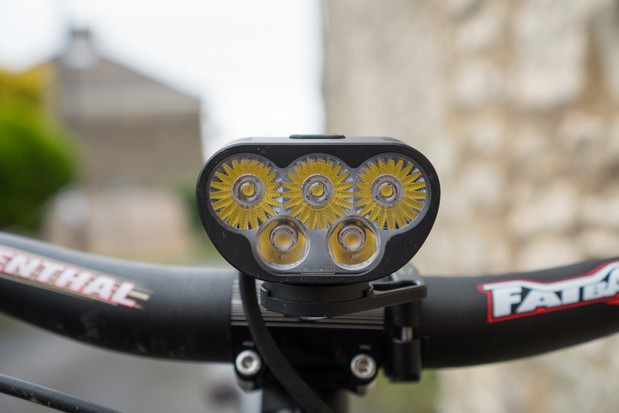 It emits an unparalleled spread of light. Alex Evans

Along with the beam’s spread being exceptionally wide, the cut-off between light and dark either side of the light is so gradual and far enough away that by the time there’s no light, its cut-off is almost imperceptible.

This means it’s fantastically easy to see roots, rocks, trees and other obstacles off to the side of the trail and around turns, making this light’s performance virtually unbeatable. Couple this beam spread with the overall power and it almost feels like you’re riding in daylight. 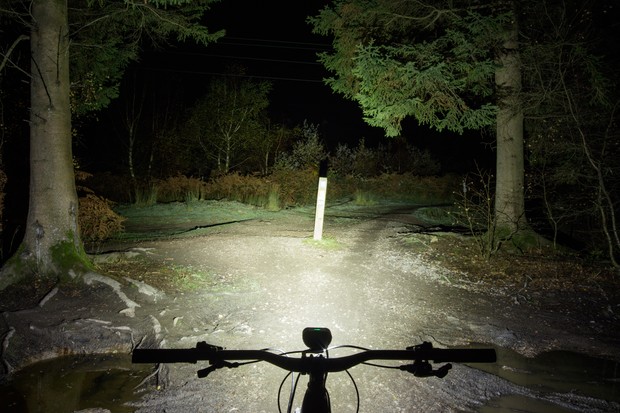 In fact, there’s so much well-focussed and perfectly formed light being emitted that hardly any shadows are cast behind rocks and roots, or compressions in the trail, suggesting that not only does the beam flood from side to side, it also points downwards significantly.

Although it’s very easy to toggle between the light’s modes using the button, it is possible to get lost in the three, five-mode cycles. Take a careful look at the front of the light and it’s easy to see which LEDs are on or off, but this isn’t ideal. With 15 options, it would be nice to have a mode indicator. 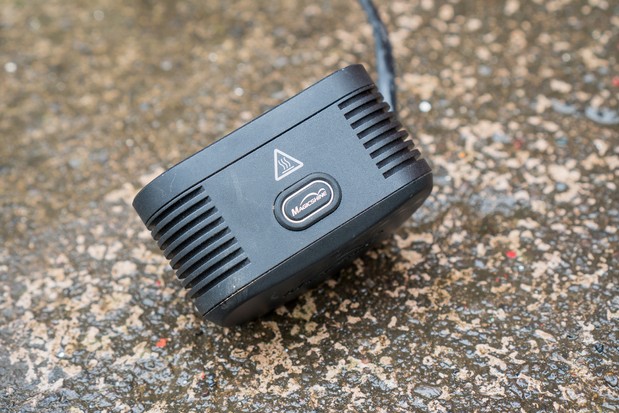 The single button doubles up as a battery indicator Alex Evans

At full power the light’s thermal protection does cut in if you remain stationary for a prolonged period of time or if it’s a hot evening.

The Velcro straps make it easy to attach the light’s battery to your frame no matter its size or shape, and because the strap isn’t elasticated it’s possible to get a secure fit. The cable that attaches battery to head unit has another Velcro strap to secure any excess to your bike’s tubes.

The bar clamp was very secure, easy to attach and the Garmin-like system makes it a doddle to take the light on and off. Because the head unit weighs a mere 144g it can be used on helmets too, and Magicshine does offer a compatible £6.99 helmet mount and £4.99 extender cord. I think it’s best suited to bar-mounted applications, though.

The frankly astonishing 2-hour 20-minute run-time at full chat is impressive, exceeding the claims by 1 hour. The lower 5,000 and 4,000 lumen modes provide more than enough power to get rowdy and give plenty of extra time on the bike. The four-step battery indicator is a bit of a let-down, but with that much run-time at that many lumens, it’s not really a massive issue.

The Magicshine Monteer lives comfortably up to its name: the power, spread and colour of the light emitted from the five LEDs is magical, making it one of the best-performing lights I’ve used in recent times.

The side-to-side spread and cut-off is exceptional and this is what puts the light leagues ahead of some competitors’ offerings.