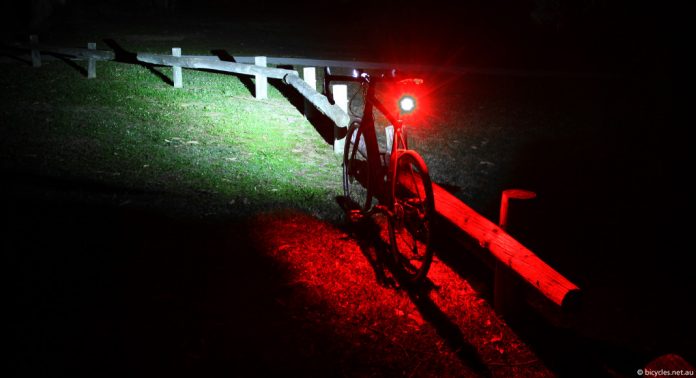 Although it is the responsibility of the motor vehicle driver NOT to hit other road users, the reality is that we cyclists are the vulnerable ones. Even if riders shouldn’t have to compensate for the driver fault, inattention or blatant dangerous driving, the more we can do avoid these risks, the better. Industry studies have found big improvements in driver recognition of cyclists when riders use Daytime Running Lights (DRLs). And in this day and age where drivers are easily distracted by mobile devices and in-car technology, Daytime Running Lights are a worthwhile addition for your bike.

On BNA I am putting two Magicshine lights to the test. The first is the powerful Allty 1000 front light that can illuminate your path through darkness, or be used as a DRL in one of two flashing modes.  It also includes a rather baffling “always on” 55 lumen LED strip.

The rear SeeMee 200 combines a rear light with an additional downward facing “tracing light” that illuminates the ground beneath your bike for added visibility in low light conditions.  It also highlights your lower legs as you ride. This sort of “bio-motion” (where road-users identify you as a human) has also been proven to also increase rider visibility.

In Smart Mode, the SeeMe 200’s ambient light sensor will disable this tracing light during daytime, as it isn’t bright enough to be seen in daylight, and drains the battery fairly quickly.

In the hand, these lights feel very solid, but not overly heavy. The Allty 1000’s aluminium body feels particularly sturdy, and while small, the SeeMe 200’s plastic body feels well made.

The exposed downward facing LED lens does protrude from the body, so be careful not to drop it!

The recharging ports are easy to access, with quality rubber covers to provide waterproofing for the Micro USB ports.

The SeeMe 200 is IPX6 rated, and the Allty 1000 is IPX7 rated, meaning they can both survive riding in the rain, making them a viable option for year-round commuters.  The IPX7 rated Allty 1000 can even survive being submerged up to one meter.

The front and rear lights weigh 130g and 40g respectively, not counting their mounting straps.  For the high visibility they provide, these weights are more than acceptable, and their slim designs mean they should easily fit on most handlebar and seatpost setups.

Considering their functionality, Magicshine have done a good job balancing size with weight and battery life.

The SeeMee 200’s included rubber seat clamp is notched to fit round or aero seat tubes, but despite my bike having a D-shaped seat post, I never had any problems with the light moving around.  The incorporated silicon strap is simple and easy to remove and install if you move the light between multiple bikes.

The included seat-rail clip feels secure, but is not compatible with anyone using a saddlebag to carry their breakdown kit.  If you have your seat clamped all the way forward on its rails, you’re also out of luck.

Personally I’d run a cable tie through the seat clamp to the seat rails if using this bracket, just for peace of mind, especially if my commute was especially bumpy and/or partly offroad.

The shortest strap already fitted to the handlebar clamp fitted my round bars, and the strap grips on very well once tightened and doesn’t allow the light to move around.  However, it grips so well that if you wish to adjust the angle of the light mid-ride, you will need to use an Allen key to loosen the strap and adjust the angle.

Another annoyance of moving the Allty 1000 between bikes is needing to use an Allen key to remove and install the strap and mounting bracket.  There is also only one small metal nut included with the light, that must be moved between straps.  Losing this nut would render the mounting straps unusable.

Both lights use a Garmin-compatible quarter turn mount, making them quick and easy to remove and install.

For those that enjoy longer rides, especially riding in the dark, good battery life is a must.  Obviously, a high powered constant beam will drain the battery faster than a lower powered beam, or a regular flashing pulse.

The Allty 1000’s beam is nicely focused, yet wide enough to light the path or road ahead of you.  The cone of light does extend vertically as well as horizontally, so from a “sharing the road” perspective, you’d definitely want to point this light well down when on roads or shared use paths to avoid blinding oncoming traffic.

Magicshine claim the following run times from its 4000mAh battery for the Allty 1000:

Despite the name, the SeeMee 200 actually runs at 140L in its brightest normal mode (options are 30, 70 and 140L).  This is still very bright for a rear light, and some riders may even feel this is too bright for their ride mates to sit behind.

The 200L maximum output only occurs when braking is detected in Brake Sensor mode. The 200L light then comes on solidly for about 5 seconds at 200L before resuming your previously set pattern. Many manufacturers are utilising accelerometers to incorporate this sort of “smart” functionality.

Magicshine’s own marketing material warns that the trace light and smart brake light modes take a heavy toll on battery life, so the brake sensing mode may be okay for shorter rides and commutes, but not for longer all-day rides.  On a 4 hour ride that began before sunrise with the trace light on before automatically switching to daytime mode, the light had reverted to “limp home” mode by the 3 hour mark, and was flat before I’d finished the ride.

With a maximum “non smart” running time of 25 hours, it’s easy to see how much power the downlight and braking sensor drain from the unit. A big bonus of both lights is that their power buttons are large enough to operate while wearing winter gloves.

The power button on the Allty 1000 is especially handy, being lit by a green LED surrounding the button.  This makes it easy to adjust modes as the sun rises or sets.

As with any rechargeable device, one may reasonably expect run times to reduce over the life of the unit, and the batteries on both units are not removable.

One feature I’d like improved on both lights are the battery life indicators.  Both units only display red for 0-30% or green for 31 – 100%.  This could easily lead to someone starting a ride with a green indicator, but only 31% battery life, and running out of power very quickly.

The rear light does have an automatic “limp home” low powered flashing mode, but better status indicators would be an improvement for future models.

No amount of hi-viz clothing and flashing lights will protect you from a driver that is truly not paying attention, but daytime running lights are a light weight, slimline option that might just help you get home to your family safely. I’m a big believer in them, and the Magicshine units supplied for testing perform their intended function admirably.